You might think you need to listen to your dermatologist for every little advice concerning your skin. In reality, you may just be missing a little Dr. Van Nostrand in your life. The popular Seinfeld character may be known for his wacky antics but his wisdom is far and above what any dermatologist or skin care blogger can provide. Kramer’s a man that acted without thinking. While many of these actions were bizarre and foolish some of his most regular habits were some of the wisest. Don’t believe me? Let’s take a look: 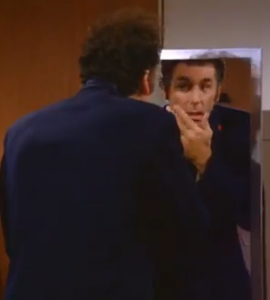 Kramer moisturized. Obsessively.
It’s an understatement to say that Kramer took care of his skin. He’s by no means a model (though Calvin Klein might have something to say about that) but he still found the need to regularly apply balms of all kind. Usually these weren’t cheap generic ones but exotic brands with special benefits. He even brought a little bottle with him wherever he went.

He was particular about the shaving lotion he used as well. Harsh aftershaves usually consist of alcohols that dry the skin out and further damage the skin. While we wouldn’t recommend butter, Kramer’s aftershave of choice, we recommend using a regular moisturizer to both shave and apply on after.

Kramer took care of his scare
“You put the balm on? Who told you to put the balm on? I didn’t tell you to put the balm.” Kramer certainly ruined attorney Jackie Chiles’ day when he found out that the coffee spill burn that they were suing for disappeared after a healthy application of balm to the burm. Scarring is a devastating effect of a bad deep skin wound. Unless you’re suing Starbucks over spilt coffee, it’s highly recommended to consistently apply a moisturizer or regeneration cream to a damaged area.

Kramer learned the right way to lather
Believe it or not, lathering is something very few people do right. It’s an art that we try to teach every customer to do properly. Without proper lather, the benefits of a good soap will not be reached over the whole skin surface and other products will not wash off. This may be more damaging in the end. Kramer lathered all wrong in the shower. What he did was take advice from Jerry about the proper way to lather. He even took notes from other bathers. Not something I’d recommend anyone to do in a public place but is no reason not to consider in taking advice about.

This is where the importance of showering correctly as a whole comes in. Kramer enjoyed showering so much that he installed a garbage disposal so he could even prepare food while he was in the shower. He even bought a shower head specially reserved for elephants. Take a long, hard look at your bathing habits. Water quality, duration and lather habits are all highly important to healthy skin. 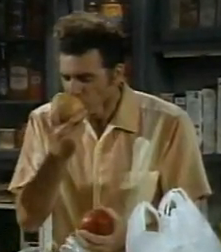 Kramer enjoyed his fruit
People that eat a healthy serving of fruits and vegetables have better overall skin health. You didn’t need to tell Kramer this as he regularly consumed fruit of all kinds. He became so picky about his fruit that he was even banned from the local farmer’s market. At one point he even cut off storing foods long term, opting for fresh fruit only from food stands. This is a habit that you should take to heart. The right amount of fruit and vegetable servings not only makes your skin glow but it’s healthy for your overall wellbeing. The fresher the better as Kramer always said.

When in doubt, Kramer researched it
Kramer was by no means a Julliard-trained dermatologist.  Now his alter-ego Dr. Van Nostrand on the other hand was a different story. While impersonating a dermatologist, Kramer found himself in hot water over a patient’s possibly cancerous skin tumor. He scoured the medical books to see if he could figure out what was wrong and almost opted to take a deli slicer to the tumor. Don’t take a deli slicer to a skin tumor but be proactive about any changes to your skin. If your questioning a skin condition try asking online. Contact us with a question and we will do our best to answer with a solution.

Kramer didn’t stress the small stuff
“Kramer goes to a fantasy camp. His whole life is a fantasy camp. People should plunk down $2,000 dollars to live like him for a week.” This is perhaps most important point I can make. Kramer is a rare character in pop culture. He’s not only known for his antics but for his lack of stress. Over anything. Kramer lived like he wanted and that was how it was. No fusses about it. Studies show that people that live the longest are the ones that live optimistically. That’s good for your skin and for longevity.

Kramer did some terrible things for his skin that are best left unmentioned – but I’ll mention anyway. He tanned too much and he smoked cigars. So take the examples with a grain of salt. The specific instances of how Kramer lived his life is not something any sane person should mimic.